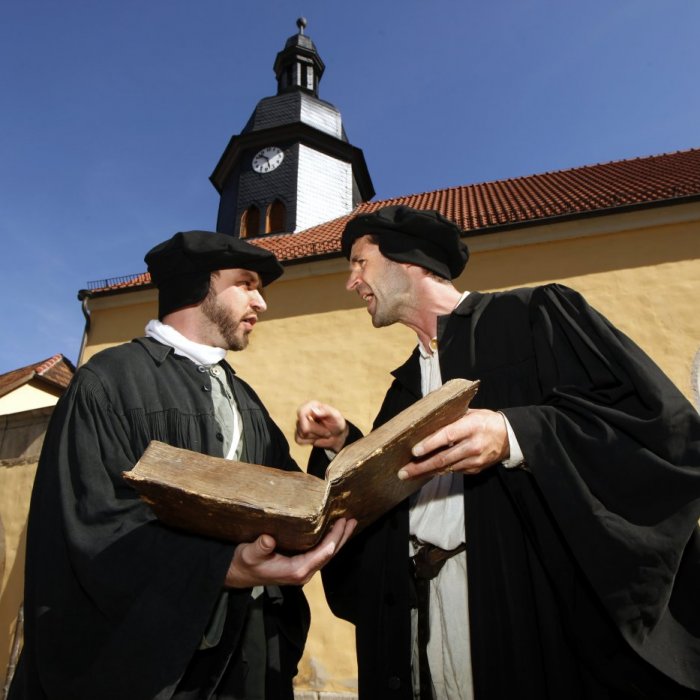 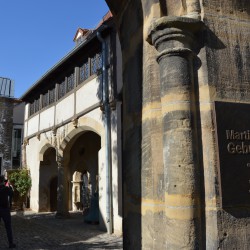 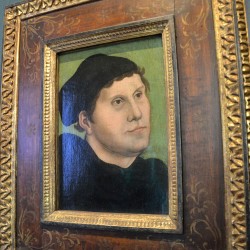 A group trip with a professional English speaking guide on the trails of Martin Luther, visiting places such as Eisenach, Erfurt, Eisleben, Torgau, Wittenberg and Leipzig.

The Reformation in Germany: Luther tour

Your Luther tour starts in Eisenach. The „Lutherhaus“ was one of Luther´s housings as he studied Latin in Eisenach. During your visit, you can take a closer look at historical artefacts from medieval times. The following free time can be used to explore the picturesque old town of Eisenach on your own or to have lunch. The imposant Wartburg Castle overlooks the city and is one of the most important symbols of German history. Regarded as outlawed and banned by the Pope in 1521, Martin Luther took refuge at this place. Disguised as “Junker Joerg”, Martin Luther used the time to translate the New Testament from Ancient Greek into the German language. The almost unaffected Luther room will let you feel the authentic atmosphere of Luther´s time and presence. Transfer to Erfurt.

In medieval times, Erfurt was a powerful city. During the lifetime of Luther the city was home to not less than 55 churches and 11 monasterys. St. Mary’s Cathedral in Erfurt is known as the place where Luther received the priestly ordination and held lectures on Bible theology for students. The Krämerbrücke (Merchants‘ bridge) is a very special and famous medieval bridge. The bridge is lined with half timbered houses (still inhabited) on both sides, an absolutely unique construction in Europe. The Bridge – used for pedestrian traffic only – spans the Breitstrom (a branch of the Gera River) and links Benediktsplatz with Wenigemarkt.

On our Luther tour we travel on to Eisleben, place of Luther´s birth and death. The guided tour will introduce you to the historical sights connected to Luther. In Luther´s  house of birth a museum is hosting medieval Bible translations, various portraits of Luther and a faithful reproduction of the room he was born. Luther´s last residence is also part of the Eisleben tour. In the Eisleben´s Church of St. Andrew, Luther´s body was laid out in February of 1546. Transfer via Halle to Leipzig.

Today, Luther tour takes us to Torgau. The local castle chapel of Hartenfels castle – the first new build protestant church in Germany – was consecrated on October 5th of 1544 by Martin Luther. Torgau´s Marienkirche contains the tomb of Katharina von Bora, Luther´s wife. Our next station is Wittenberg. The guided tour takes us to Wittenberg´s Castle Church and thereafter to St Mary’s Church. The castle church is the place where Martin Luther nailed his famous 95 theses to the church doors. This was the starting point for the Reformation, which changed the world forever. The castle church is also the place of Luther´s grave. The Luther Hall is the highlight of Wittenberg  – Luther´s residence – and today the largest Luther museum in the world. Luther´s monk’s habit, the “Ten Commandments Panel” by Lucas Cranach and contemporary manuscripts and medals are part of the exhibition. The originally preserved “Lutherstube” was the scene of Luther´s famous table talks.

A city tour will make you familiar with the most important attractions of this old trading centre. Martin Luther is linked with the town in many ways. The Pleißenburg castle was for one month in 1519 the scene of the famous Leipzig Dispute, a theological disputation between Catholic hardliner Johannes Eck and Martin Luther. Both sides claimed victory. Finish of our Luther tour or we can make offer you longer programmes.

Travel expert for all our tours linked to Luther

The prices may vary according to the season.

If you wish any changes in the travel programme, please contact us. We will send you our best tailormade offer!

Travel expert for all our tours linked to Luther