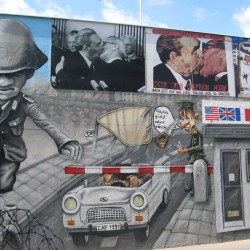 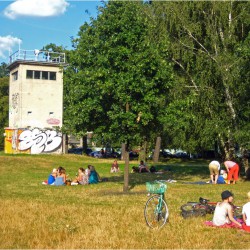 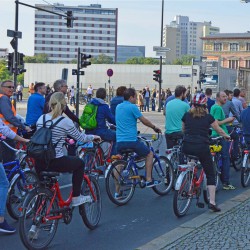 Berlin has a reach history and an efficient way to see it all is to take a bike tour which explores all of the most important landmarks. The Berlin Wall bike tour introduces you to a variety of significant locations.

Berlin Wall Bike Tour: the Berlin Wall trail is about 160 km long. It begins in Berlin, which was divided into 2 parts in the times of West (BRD) and East (GDR) Germany. On the bike tour we will ride along the parts of the wall learning the history of that time and enjoying the local nature.

You check in at the middle class hotel, which is situated next to the underground or train station. You can travel by your own bike or rent one in the city.

After breakfast you begin your bike tour in the capital of Germany, Berlin. You will visit the place, where the remains of the wall and former border posts still exist. You continue your tour riding along the Invalidenhof. Today’s highlights are the Brandenburger Gate and Potsdamer Square. The famous „Checkpoint Charlie“ – former border checkpoints between West and East Berlin is on our route today. Then we ride to the Warschauer Straße (Street).

Today we begin our trip on the Warschauer Street. The programme “Berlin Wall Bike Tour” includes visiting the “East-Side-Gallery”, which is the longest part of the Wall, which still remains today. Then we will visit the monument of Chris Gueffroy, the last person to be killed at the Berlin Wall through the use of weapons while trying to escape East Germany in 1989. The we ride through Schönefeld, Buckow and Lichtenrade to Teltow.

The ride begins in Teltow. You can have a look at the marvellous Potsdam landscape of palaces, which was a part of West Berlin in the past. Today it is a popular tourist place next to Berlin. The route goes over the Glienicke Bridge to the church Heilandskirche in Sacrow. The church was located between the borders in 1961 to 1990. Then we ride to Falkensee.

Directly on the Havel River we ride from Falkensee via Schönewalde to Hennigsdorf. On the way we pass by three former West Berlin exclaves. In Hennigsdorf there is a former water border control. Then we ride through the woody part of the city to Hermsdorf and the centre of Berlin.

It’s time to say good bye to Berlin or book your further programme.